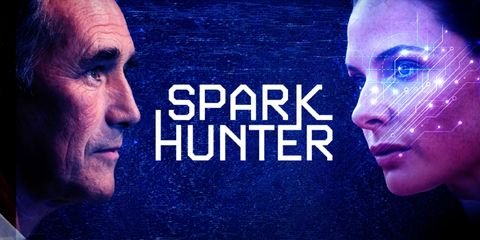 Hey fiction podcast fans this week’s review comes in an abridged format — or if like me, you are more of a visual type of person – this week’s review is written on the back of a packet of cigarettes. So grab your travel sweets as we unpack Spark Hunter, a Fighter Steel Production, brought to us by those wonderful people over at Realm.

Spark Hunter’s chain of events starts when joint British & US governments decide to use the devil’s crayon instead of an Etch a Sketch and create the most advanced AI female on the planet called HER (Rebecca Ferguson). They then load HER up with the usual human abilities, and whilst there, why not make her completely sentient – as you do!

As everyone knows (all too well), engineering such a sophisticated AI lifeform that evidently breaks its code by developing a deeper consciousness is only ever going to end one way, right? Ultimately that tricky task of deciphering if their creation has gone rogue, or not, falls to her creator uniquely called Creator voiced by Mark Rylance.

The audio soundscape within which this series has a stealthy AF Blade Runner, emotion-evoking, futuristic vibe — where it ironically also seems to be constantly raining. And like Blade Runner, the plotline within Spark Hunter at times can feel equally as complex and confusing.
Let’s kick that can further down the road! Through its detailed styling, some scenes hold lengthy deep discussions that include noticeable pauses for effect — which I can imagine might not float every listener’s boat.

Deep discussions aside, this podcast offers some next-level Mariana Trench depths of detail to an absolutely stunning audio backdrop. Casting is like a flight of craft ale beer loaded with options — there are scores of big-hitting actors on display – including Charles Dance’s EPIC authoritative voice as a sharpshooter character called Shadow.

So will Spark Hunter spark an interest in you?
If patience is one of your virtues, you savor grittier sci-fi podcasts with a slower pace, and can envision a podcast that feels a bit like 90s anime cyberpunk classic Ghost in the Shell – hit that download button now.

If you enjoyed this review, and would like your fictional podcast considered for a review by Tea in the Sahara please get in touch – tinthesahara@gmail.com or via my socials. Cheers, Kev.

Previous Tea in the Sahara reviews