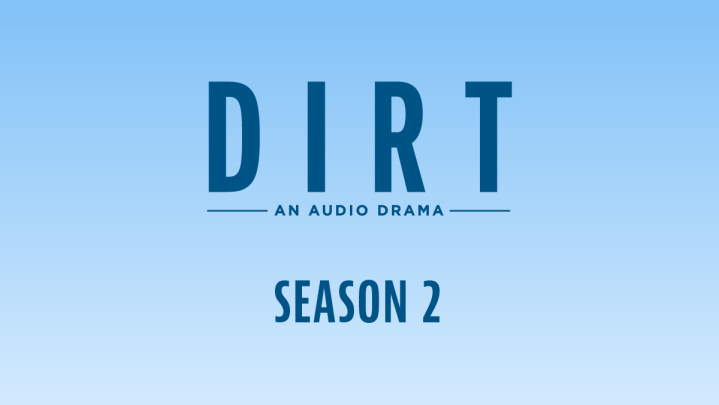 Back in March this year I had the pleasure of reviewing a truly awesome scripted podcast called ‘Dirt’ by the gifted Kris Kaiyala. Well at last Dirt is back with season two, and Kris has kindly given me an exclusive sneak peek of episodes seven to thirteen which covers about a four day story-arc time frame.

And yep, like a cheeky boomerang on it’s return flight I’m on hand with a small review on why you should jump on this super slick inde podcast. A podcast that in my opinion should be as popular as the runaway viral Netflix’s series Squid Game!

Kris writes, produces, directs, and is also the voice behind lead character Joseph Elo for STUDIO5705. In case you didn’t read my review of series one of Dirt you should head over there for further context. And once you have done that consider binge listening to Dirt on your podcast player of choice; trust in old Kev you will thank me!

For all those Amazon Prime peeps with zero patience looking for a fast-track I have you covered with this brief synopsis – the plot around Dirt follows lead character & narrator Joseph (Kris Kaiyala), a successful Seattle playboy CEO, and owner of a futuristic app development agency.

Joseph receives a letter in the post from his grandfather, which wouldn’t make for much of a gripping story-line, however Joseph’s grandfather Aimo passed away over thirty years ago. Queue a treasure hunt across the States portrayed with all of its beautiful topography. This podcast is definitely an audio adventure for those keen to understand America’s unseen historical past, which thankfully does not include Disneyland.

The second series transitions pleasantly from the first season with Joseph seemingly hot on a breadcrumb treasure trail of boxes filled with connecting puzzles & clues supposedly left by Aimo.

Although the files I listened to were in draft format that takes nothing away from the magic of this immersive audio drama. Kris’s continued detailed narration is pitch perfect for a narrator/lead character. For me the key takeaway from this exceptional podcast is the level of sound production that Kris stamps into every episode.

It is that eye for detail, and level of high definition audio which makes this podcast stand head & shoulders above others. I’ve banged on about this before in my previous review, however Sizzling bacon, buzzing metal detectors, guitar band feedback noises feel so nuanced and tangible within Dirt.

When a character is simply walking around within a scene the effort & thought process that has gone into making you aware of different surfaces they are treading on can be heard. It honestly feels as if you are physically walking beside Joseph on his treasure hunt across a richly depicted landscape.

Mr Kaiyala has an audio ninja ear for sound with the ability to create lush soundscapes that our characters encounter. These include, but are not limited to bustling bars, and even sea planes landings on water! There are few indie podcasts that offer up such a rich texture of sound & audio detail. The cool segway beats from Dirts previous series is back and incorporated into season two, seemingly guiding the listener from one plot scenario to the next.

Like Aimo’s canny treasure hunt the listener is introduced to background music supplied by the super soulful Mya Tozzi who performs the track “Me and My Other” at the end of chapters ten & thirteen. Mya has an effortless, angelic voice which made my mind wander, transferring me somewhere else; a warm place where you can relax & sip strong cocktails type of fantasy place. Another ace inclusion into the cannon of this amazing podcast which blends so well into those scenes.

I previously knew zero about Mya Tozzi, but if you take yet another thing away from one of my reviews definitely check her out via her Bandcamp page: https://towniemusic.bandcamp.com where you can purchase tracks used within Dirt, and support an incredible artist.

In terms of story line I won’t go into too much detail and steal the listener’s thunder and ruin the experience for you guys. Let’s just say Kris has cranked up the continual story line to eleven adding yet more fun escapades for our character Joseph to fall into. Oh and fans of the whole zebra crossing fake moustache & eyebrow combo will be happy as it surfaces again within season two.

Most of the regular characters return including Antonia Flores (Megan Morales), who returns with a touch more sass than from the previous season which is fun. Fan favourite of mine Mrs Fixit herself; Mel (Jessi Brown) is back, and is as sarcastic as ever which is wonderful for this overtly sarcastic Brit reviewer!

Let’s close out with opinion time. If season two of Dirt was an album, then Kris has certainly beaten off the curse of the difficult second album. What he has managed to do in my opinion is produce yet another award winning podcast which I cannot wait to listen to in its finalised form.

So without sounding like a Dirt fanboy I urge you to listen to this podcast if you enjoy your audio drama’s with a contemporary vibe, and shrewd nod to the past. Dirt will definitely be right up your alley. Clever writing backed by awesome audio are the last words I will leave you with if you still happen to be on the fence with smashing that download & subscribe button.

Dirt season two launches on the 2nd November and as far as the format goes, it’s one new episode released per week on all platforms starting with episode seven & going through Chapter thirteen. However if you don’t want to wait a week for new episodes you can pay to subscribe to gain instant access to all of the new episodes to binge to your hearts content.

And that’s it folks, this short review is finito! Let’s move into any other business. Recently I launched my first newsletter celebrating Halloween, and a selection of horror themed podcasts that I have reviewed this year. So if you haven’t checked it out yet you can sign up via my Twitter profile, or by using the small sign up box at the end of this review.

Kris Kaiyala has also agreed to a Q&A sesh with Tea in the Sahara in the near future which will offer you lucky podcast fans further insight into how Kris made Dirt so bloody good!

If you are a writer, creator, or production company looking to have your podcast reviewed just like Kris maybe you should consider Tea in the Sahara? Perhaps you like the previous Q&A format that I have done, and are looking for something similar for your own review? If that is the case, then maybe (just maybe) I am the Independent Podcast Critic Writer you have been looking for. Please get in touch via my contacts page, or email me directly tinthesaharah@gmail.com.

You can follow more about Dirt on their website and the podcast can be found on Apple Podcasts & Spotify or from wherever you grab your podcasts from. Just make sure you do!

For further Tea in the Sahara reviews please check out my other podcast & audio-book reviews. Until the next time podcast people, cheers Kev.

Where podcast reviewing is far from beige!

Please check your email to confirm your newsletter subscription.