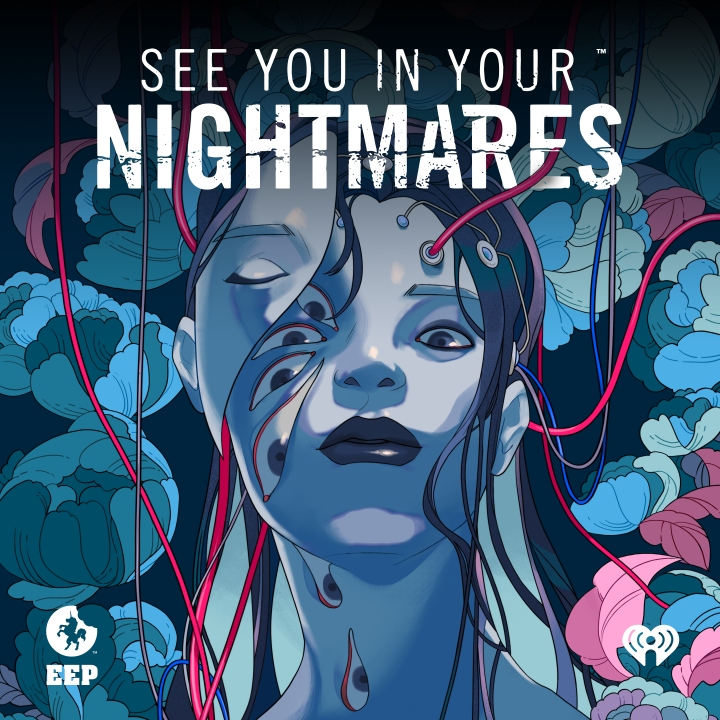 As we lunge into autumn/fall this months particular podcast review came as an absolute no brainer after barely listening to thirty seconds of it’s trailer! Let me know if the trailer did it for you as well?

You see guys this months podcast fits like a glove with the changes in the season, and as the nights draw in and summer becomes a distant memory I wanted to introduce you to a stunning horror podcast aptly ‘See You In Your Nightmares’.

However before we march on I would quickly like to thank those marvellous people down at iHeartRadio for reaching out to me and recommending I take my ears for a spin with one of their latest podcasts offerings. Again cheers to Alison Hemmings & Jenn Powers for the intro to this awesome 3D podcast best enjoyed through headphones.

Additionally if you haven’t already I highly recommend you checking out my reviews of iHeartRadio’s  ‘Aftershock’ and my follow on Q&A blog with writer/director/actor Sarah Wayne Callies.

‘See You In Your Nightmares’ is a 12 part scripted horror podcast from Einhorn’s Epic Productions, and iHeartRadio that has an ever so faint ‘Stranger Things’ vibe which will appeal to fans of the hit Netflix show.

The podcast follows Seventeen year old Harper Hart (Rachel Oremland) a willing patient at the Lutwidge Wellness Centre. Reasons for her admission to the centre is Harper suffers from extreme insomnia, and claims to have lucid dreams of a monster following the tragic death of her twin sister Callie a year earlier.

This event leads Harper to believe she has shadows living within her head, and feels the radically futuristic treatment led by Dr Carter & her team as the only solution to cure Harper’s rare sleeping disorder.

At the centre Dr Faith Carter (Keri Tombazian) along with sidekick Finn (Phil Buckman) use the latest AI wearable technology called Blossom to cure patients of their nightmares. Blossom is a small Fitbit-esque wearable watch device that more than captures how many steps you have achieved in a day (or not in my own case!)

The Blossom device monitors literally every action Harper and the rest of the centre’s patients make like a souped-up Alexa on steroids. Again a clever piece of writing which really taps into our own current virtual assistant AI world of smart phones, Peloton bikes, and Alexa devices.

With the Blossom device activated the centre can monitor the patients to fully understand why they have such chronic nightmares and sleep deprivation. And as we all know popular culture dictates these ‘help’ style facilities never do what they say they will on the tin. Nine times out of ten they have a very sinister ulterior motive in mind.

That is before I mention the Blossom room set in the basement (Dun, dun, dun!) So the Blossom room is where Harper goes for what is called rotation, and where the good Dr monitors Harper’s immersive dream patterns that are super very freaky to listen to. This is where the 3D sound really comes into its own.

It is also within this dream-like state where Harper comes face to face with her dead sister Callie, and Harper’s very own monster in all its spine-chilling form.

The dark detecting tech theme the show opted for raises a valid point about how much society freely gives away it’s personal data to government bodies, and tech giants alike.

Four-ish episodes in its summary time folks! So let’s categorise this podcast into it’s good, and the not so good and unpack some truths. Starting in reverse order lets get my small gripe points out of the way first.

When one of our characters enters the sleep induced Blossom room where Dr Carter monitors their sleep patterns at times the audio can become slightly confusing with lots of shouting, and heavy breathing within these sequences.

I know the purpose of these scenes is to help create context, and depth by demonstrating individual nightmares faced. That be said at times I found myself having to revisit some of these scenes a few times, and re-listen to them to fully grasp what was going on.

Another small thing that slightly jarred was the beep-beep sound that the blossom device makes when activated, which really reminded me of a similar noise supermarket doors make when they open & close. Maybe that’s just me, but ponder that statement next time you enter your local convenience store for a loaf of bread and a pint of milk!

So that’s Kev’s niche blemishes out the way, lets concentrate on the reason why I am truly enjoying this audio drama. I love, love me some horror podcast! Come to think it I haven’t reviewed a gripping big production horror podcast like this since QCODE’s ‘From Now’.

The sound team behind that all-important 3D sound, created by Sarah Gibble-Laskathe really transport’s you directly into each characters nightmares. Sonically creating an abstract, Alice in Wonderland dreamscape based solely in audio is by no means an easy feat.

This podcast also has a real winner in the form of lead character Harper Hart, however I always like to rate a podcast not only by it’s lead, but by the supporting cast. Few come better than fellow Brit Alfie (Obi Abili) who’s insanely infectious personality reminded me of my own pals back in London with lines like ‘big man tings’, ‘safe’ and ‘init!’

Another character to mention is Finn one of the staff members at the centre. Finn is the typical slippery salesman type vaguely similar to Burke from the action 1980’s movie Aliens. You know the type of chap who you desperately want to believe is doing the honest thing by you, but in reality hides behind buzz words & corporate slogans; that’s Finn.

Bizarrely I have a soft spot for the villain within a podcast, and not always the lead protagonist. Odd I know, but in reality we kinda know roughly what path the good guy/gal will take to either glory or redemption. Getting a good baddie right, well that’s not so simple.

Getting the right amount of menace within a pure audio setting can be tricky. Dr Faith Carter is a class act at balancing narcissistic behaviour with flawless professional demeanour, and making it look easy. Remember folks the devil wears Prada!

So as I said at the top of this review if you enjoyed Stranger Things, you will most definitely like this podcast. The dreamlike world our cast enter when in the Blossom room has traits of the upside-down world within Stranger Things. Look out for the dream-jumping element that Harper & the cast develop as the series progresses which is uber cool!

The concept & writing is modern & fresh flanked by a talented cast, and incredibly vibrant audio sound so what’s not to like? Being a man who enjoys the occasional flutter my money is on the seasons finale coinciding with Halloween conveniently around the corner.

The artwork by Yejin Park, Key Art & Promotional Art illustrator should also get a mention for it’s slick, quirky, anime styling. The shimmering blue backdrop with all of those creepy cascading eyes captures the essence of this awesome podcast perfectly.

There we are folks another review completed. Shortly I will be giving you lucky people more Tea in the Sahara content in the shape of a newsletter. Details to follow, and suggestions on content are more than welcome.

Here’s the thing guys, Tea in the Sahara is my hobby and creative outlet that I am able to commit say 30% of my time to because like most people I have a full time job. My dream goal would be to move my creative writing from a part-time hobby into a full time gig.

I know Rome wasn’t built in a day, or even over a weekend, but just think about the quality of content I could write if I was doing this 100% full-time? As they say the possibilities could be endless!

Are you are a writer, creator, or production company looking to have your podcast reviewed? Perhaps you like the previous Q&A format that I have done, and are looking for your own review? If that is the case, then maybe (just maybe) I am the Independent Podcast Critic Writer you have been looking for. Please get in touch via my contacts page, or email me directly tinthesaharah@gmail.com.

You can follow more about ‘See You In your Nightmares’ at seeyouinyourdreams.com and the podcast can be found on Apple Podcasts & Spotify or from wherever you grab your podcasts from.

For further Tea in the Sahara reviews please check out my other podcast & audio-book reviews. Until the next time podcast people cheers, Kev.

One thought on “See You In Your Nightmares – IHeartRadio – podcast review”