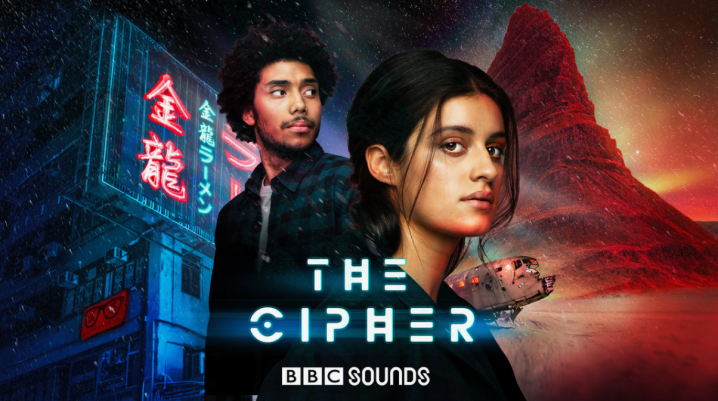 Following on from the huge success of the hit podcast The Cipher’s series finale last week I thought perhaps a follow-up review was in order. If this is your first time landing on this page (hello & welcome), for those who haven’t listened to The Cipher podcast yet I would strongly recommend that you check out my previous review from a few weeks back of ‘The Cipher’ which covers off the first five episodes in my own unique way. With this follow on the review part two I will be diving into the series at the midway point, so from episode six onwards.

Written & created by Brett Neichin with support writing by Janina Matthewson, produced by Emma Hearn, and directed & executively produced by John Scott Dryden. The Cipher is a Goldhawk production commissioned by BBC Sounds, the very same production company who brought us the EPIC ‘Tumanbay’ which I reviewed in 2020.

So are we ready to return to Narnia, perhaps crawl through a washing machine and once again fall down the sci-fi thriller rabbit hole? Oh and as always spoiler ALERT, apologies if you have not already listened to the complete series so far there will be some serious spoilers blown ahead.

We pick up the adventure continuing with that same blistering pace set within the first five episodes as we establish that Sabrina’s dodgy dad Harry worked for a secret collective of scientists called The Storks. The Stork’s headed by Ian Sinclair, played God establishing a gene-editing program thus mixing a strand of alien DNA with human DNA generating a hybrid resulting in Sabrina (Anya Chalota). Yep, you heard me right our very own anti-hero, and genius Parallax solver is part alien. Moreover, Sabrina is not the only hybrid, she also has 30 more siblings (bombshell no 1!)

Sabrina, Benny, & Fergus travel to Iceland to meet up with Sabrina’s online pal Isabella, voiced by Hera Hilmar. Queue a magic carpet ride from Black Beach, Iceland via a derelict aeroplane/spaceship and our gang end up on a tropical island where bombshell no 2 drops; Sabrina’s mum is not dead! Sabrina’s sketchy mum was originally part of The Stork’s but set up a splinter group called The Swan’s believing that AI and robotics are the future for humanity, not splicing alien & human DNA. And if that wasn’t enough, war is apparently imminent between the aliens & mankind.

The island is a front for The Swans to operate out of and learn that they are also a dab hand at engineering realistic-looking human robots like a next-level Lex Fridman. If you read my first review, you will remember that I said that I had a niggling feeling about Benny (Chance Perdomo), which I couldn’t quite put my finger on. Well in episode eight all is explained as our resident super-nerd Benny, not only works for Sabrina’s mum, he is a bloody robot! Excellent plot twist which totally blind-sighted me, and I totally enjoyed the “ah-ha” plot revealing moment.

Our trio travel to Tokyo to meet with Dr Aoki, voiced by George Takei. If this actor’s name is not familiar to you, he was the chap who drove the original Starship Enterprise in Star Trek and is also an active spokesperson for human rights campaigns to boot. Long story short, Dr Aoki was a member of The Stork’s and claims to have a vaccine for the piercing hum noise that the hybrids hear. This hum is a hypnotic noise used by the aliens, which Dr Aoki calls The Blues. Dr Aoki tries to cure Sabrina & Isabella (also a hybrid) as we get a character 180 about-turn, as the good Dr Aoki is ruthlessly murdered by Isabella who turns out is not as shy as on first impressions, and rocks venom-tipped razor blade fingernails. Who knew Revlon made such a shade?

In the ensuing fracas, Fergus (Samuel Adewunmi) is mortally wounded and sadly dies. The creativeness of the way this scene was written and poignantly delivered is a true credit to both direction and the actor’s incredible abilities. Sabrina & Benny evade Isabella & the deceitful Efrat (Olivia Popica) from Arrow and set up shop in Japan.

The pair decide that if war is coming they will need all the help they can get, and if life gives you lemons, make lemonade. They create their own cipher Parallax calling card to reach out to Sabrina’s hybrid siblings for help in the fight. The final scene is genius as the pair finally receive a phone call from Elkin, one of Sabrina’s siblings who decoded their cryptic message. Sabrina & Benny suggest for the three of them meet up; “Where are you Elkin?” asks Sabrina, queueing a long silent pause… Elkin quietly says through the static “I’m not on earth!” Bosh roll the theme music, and credits, and whilst you are there pick up my jaw from the floor. Fantastic open way to close out the series’s leaving the audience dangling on an eroding cliff edge wanting more.

My thoughts for the future of the show? Off the bat, 100% there needs to be a series two to further expand on this already amazing scripted storyline. Not to sound like The Cipher hype man, but if someone has not already had the conversation about converting this awesome podcast into what could be an award-winning TV series, you should. Take note of Netflix, BBC, and Amazon, the writing within The Cipher would easily transition to a successful TV series. Just looking at the number of people that viewed my initial review I did for the show the interest & demand are certainly there.

Why do I like this show? If you haven’t already guessed it I am a big fan of this podcast. For me, this is the first fiction podcast that I have come across that causes you to actually think, backtrack, and revisit previous episodes. The show is cleverly littered with Easter eggs like a millennial podcast version of ‘Where’s Wally’ or ‘Where’s Waldo’ if you live in the States. The smart inclusion of popular cultural references (Tinder, Reddit, Tiktok) coupled with geographical locations, and nuances is an ingenious contemporary approach to podcasting. It’s almost pioneering in terms of where the writing takes the listener. To enjoy this podcast I personally find you don’t have to be a fan of the sci-fi drama, however, an inquisitive open mind will serve you well. Even I did not know what ‘IRL’ meant to millennials, so it goes to show you can teach old dogs new tricks!

I also have somewhat of a scoop for you as I write this review. Through valuable sources, I have learnt that The Cipher’s main character Sabrina was based on a real-life person called Sabrina Gonzalez Pasterski an American theoretical physicist dubbed the next Einstein. Sabrina’s Wikipedia page makes for very interesting reading, and you can clearly draw parallels from where the inspiration came from for the shows leading lady.

Lastly, I would also like to thank the show’s writer Brett Neichin & director John Scott Dryden for personally writing to me to thank me for my previous review. Apparently, within the writing of my review, I managed to capture the spirit of The Cipher. Well, I tried my best chaps!

I hope you have enjoyed reading my continuation review of ‘The Cipher’ which is 100% worth checking out naturally on BBC Sounds and Spotify, or wherever you choose to get your podcasts from. Hopefully, you have enjoyed this review. If so, please do check out my other reviews including the interstellar ‘From Now’ or perhaps the indie comedy podcast ‘Mike Prowse Solo Travel’ which are both amazing!

Are you looking to have your podcast or audio drama reviewed by Tea in the Sahara? Well, you’ve found your perfect partner! Whatever your genre please do get in touch via any of the below methods or through my contacts page. Cheers, Kev.